Medicare Part D Guide: What You Need to Know

Introduced in 2006, Medicare Part D has since become quite tricky, with hundreds of plans to choose from. But if that sounds daunting, don’t worry—this guide will help you navigate the ins and outs of Part D and determine the best plan for you.

What is Medicare Part D?

Offered by private insurance companies and regulated by the federal government, Medicare Part D offers many choices. Once you select a Part D plan, it takes effect in addition to your Part A and/or Part B coverage. But no matter what plan you choose, it's generally a good idea to have drug coverage—even if you don’t anticipate needing it yet.

No, Medicare Part D is entirely optional. However, there are good reasons why 72% of all Medicare beneficiaries are enrolled in a Part D plan—and why you may want to consider one as well.1

If you don’t enroll in Part D now but decide to after the appropriate enrollment period, you will then pay those late penalties—unless you have creditable coverage.

How much does Medicare Part D cost?

On average, the premium (monthly payment) for a stand-alone Part D plan in 2020 is $30 nationally.2

But prices can vary by plan and your location. Your income also affects premiums and drug costs.

On your tax return, if your modified adjusted gross income (MAGI) in 2018 was more than $87,000, you must also pay an additional tax to Medicare on top of the Part D premium in 2020. The cutoff is higher for beneficiaries who file jointly, at $174,000. This surcharge increases as your MAGI increases.

There are also late penalties if you didn’t sign up for Medicare Part D at the right time which can increase your costs.

If you are under a specified resource or income level, you can qualify for Extra Help. Extra Help is a federal program that subsidizes Medicare Part D costs. It can pay for some or even most of your Part D expenses, depending on your financial situation.

Beyond Extra Help, your state may have programs to help you pay your Part D costs. Whatever your situation, if you are struggling to pay for drug coverage, it’s worth checking for possible help available to you.

See a more extensive breakdown of Medicare Part D costs in this article.

What does Medicare Part D cover?

Medicare Part D covers drugs you can administer yourself (and, surprisingly, it includes the shingles vaccine). This table shows when your prescription would be covered by Part A, Part B, or Part D:

The way the coverage works under Part D is probably different than what you’re used to, so we’ve broken it down into more understandable pieces.

Medicare Part D has a few things in common with typical health insurance—for instance, monthly premiums, coverage for drugs included in a plan, and a system of copays or coinsurance. Beyond these few components, however, Medicare Part D works a bit differently.

For example, one way Part D is different from a typical health insurance plan is that within a year, you could possibly pay four different prices for the same drug. Your costs all depend on which “phase” of coverage you fall into.

There are four phases of coverage: 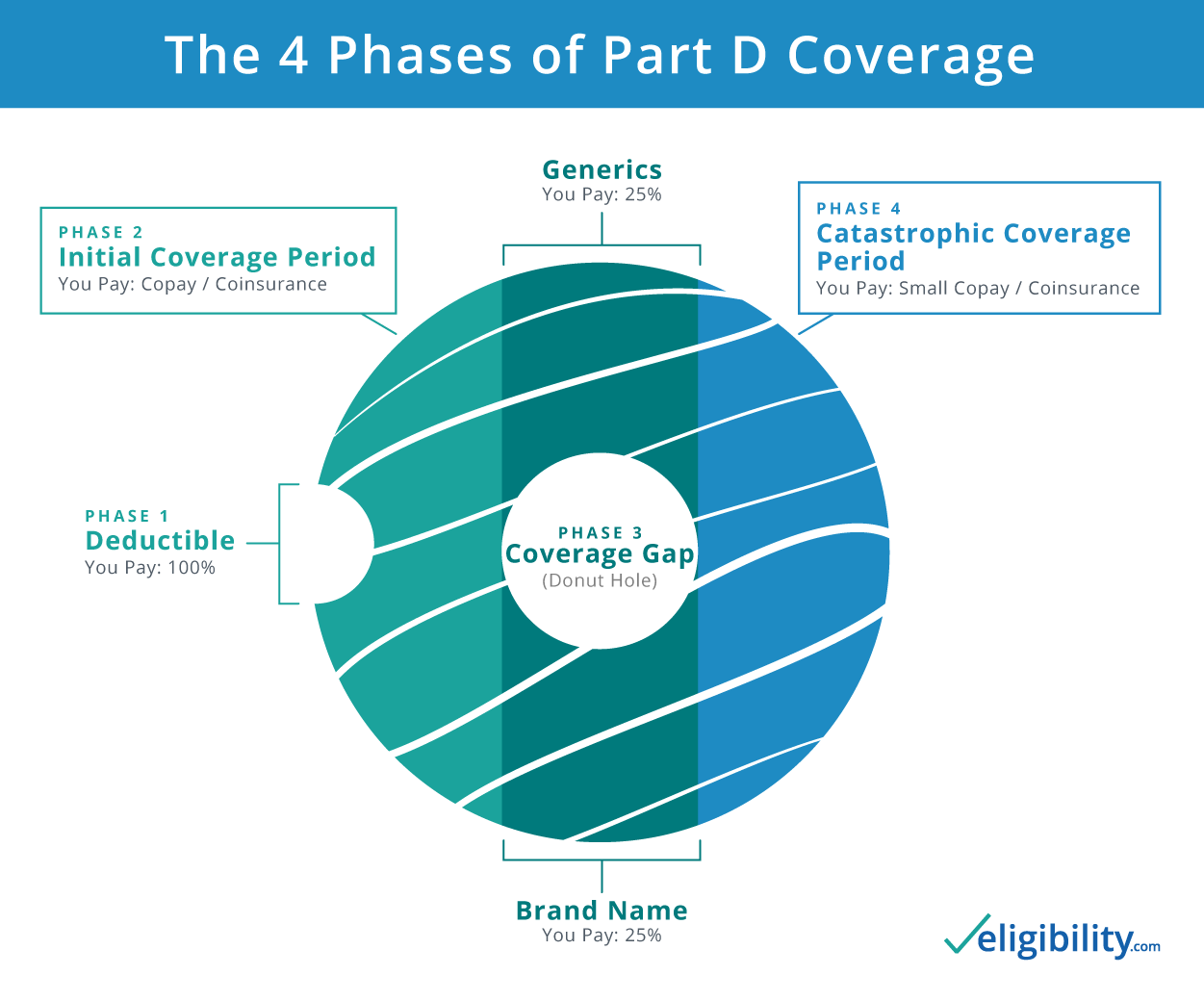 If your plan has a deductible, you pay the full cost of your drugs until that deductible is met. Some Part D plans don’t have a deductible and begin with phase 2.

In this phase, you pay the copayment or coinsurance for your medications. This phase lasts until your drug costs reach a certain limit (in 2020, this limit is $4,020).3 Once you meet this threshold, you enter the coverage gap, but you may have heard of it by its more popular name, "the medicare donut hole."

Previously, there was zero coverage provided by your insurance in this phase, but since the Affordable Care Act in 2010, the donut hole has been steadily shrinking.

In 2020, you pay up to only 25% for brand name and generic drugs in your plan. See more details on the donut hole, cost breakdown, and how to get out of it.

When your out-of-pocket spending reaches $6,350, you exit the coverage gap and enter catastrophic coverage. In this phase, your plan kicks back in full force and you pay only a small copayment on your covered drugs for the rest of the year.

Once the calendar year ends, you begin again at phase 1 and start the process all over.

Which drugs are covered by Medicare Part D?

Every Medicare Part D plan has a formulary, which is a fancy way to say a list of drugs covered by the plan. Every formulary is different, but must include at least two drugs in the following six categories:

But beyond this, plans can consist of anything a company wants to include. When looking for a Part D plan for yourself, you’ll likely want to choose the plan that covers as many of the medications you take as possible.

Are there limits to coverage?

In addition to drugs not be covered by your plan, there may also be other limits to your coverage. These roadblocks, known as utilization rules, are obstacles that you must overcome before you can get the medication you were prescribed. Other limits come in the form of a tier system.

Besides utilization rules, your drug plan may have a tier system of drugs. Depending on which tier your drugs are placed in, from Tier 1 (cheapest) to up to Tier 5 (most expensive), your costs may vary.

Each plan differs on which drugs it puts in which tier, based on what they can negotiate with manufacturers. When looking for a plan, try to get the one with as many of your medications in Tier 1 as possible.

When can I enroll in a Medicare Part D plan?

If you don’t have other drug coverage (specifically creditable drug coverage), it’s best to enroll when you sign up for Medicare Part A and/or Part B.

Typically, you want to do this during your Initial Enrollment Period (IEP), which runs for three months before your 65th birthday to three months after.

There is also an Annual Election Period (AEP), running from October 15—December 7 each year. If you didn't enroll during your IEP, you could enroll during the AEP.

How do I sign up for Medicare Part D?

It’s a bit of a process, but broken down into steps, it’s actually quite manageable. Fortunately, we have a handy guide to walk you through the whole process. Or, even easier, just give us a call and we can help find the best plan for your needs.

Hopefully, you now have a good grasp of Medicare Part D, how it works, and a few of the quirky components that differ from typical drug coverage. At this point, you’re ready to compare a few of the best Part D plans available.

Learn more about prescription drug coverage in the fourth video of our Medicare Prepared series.

Written by
Alex Enabnit
Medicare and geriatric care expert, Alex has one motivation behind every word he writes, and that’s finding you the best medical coverage for your situation. Alex has been featured on Bloomer Boomer, Best Company, HealthPopuli.com, the Daily Ledger on the One America News Network, WBAP News radio, and more. Outside of work, you can find him hiking with his wife and pup or (occasionally) going to the gym.
Read More
Related Articles