The Most Googled Health Issues Fueling Your State’s Paranoia 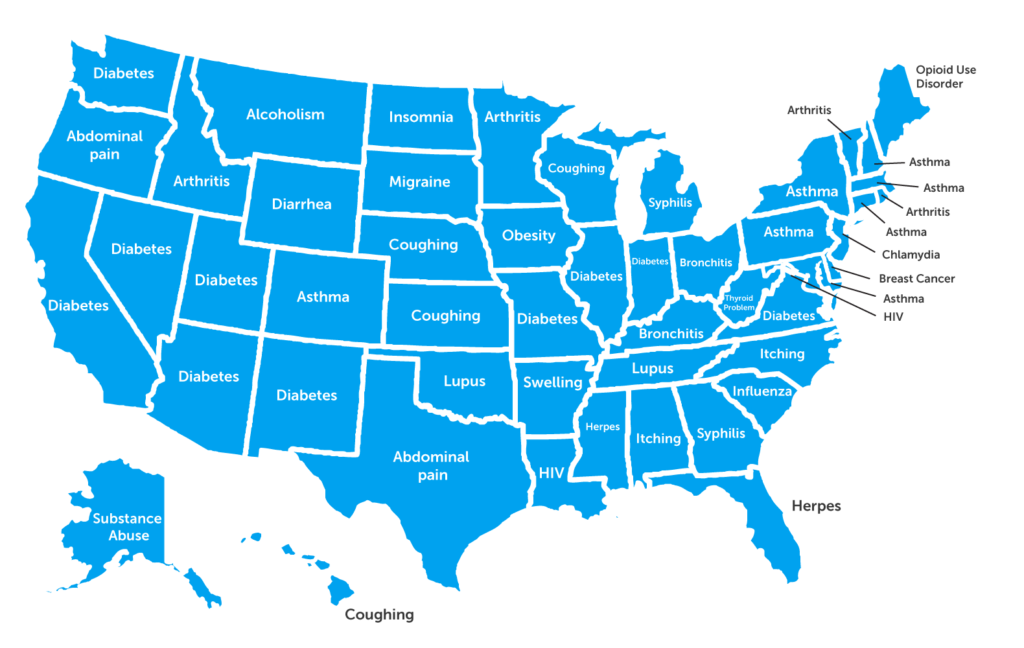 We’ve all been there: You feel an unfamiliar pain, notice an odd bump or discoloration, or come down with a strange cough that doesn’t go away. The thought turns into worry, which leads you to Google, and down the rabbit hole you go.

Just a couple of decades ago, before heading to a doctor, you’d have to rely on your friends or family to get a sense of what was going on if you felt ill. But with the internet at our fingertips 24/7, you can now hop online and google what you’re feeling to get an instant “diagnosis.”

The problem is that sources like WebMD seem to lead you to all the worst-case scenarios. Feeling an itch? It’s a horrible STD. Got a bad headache? You’ve got cancer. Bit of a fever? Ebola.

In most cases, there’s probably nothing to worry about, but that doesn’t seem to stop us from diving down the bottomless pit of Google-induced hypochondria. In fact, WebMD admits that the internet has made “cyberchondria” (yes, it’s apparently a word) worse, which is concerning, considering the source. (Now we’ve probably got you convinced that you’re a cyberchondriac, too!)

But instead of quelling your fears, we wanted to give you an idea of what other people around you are anxiously searching for in the late-night hours. Use the map above to find out what your state is the most worried about.

The method to our madness

We used Google Trends data to identify the most-searched health conditions over the past year. Then we analyzed each condition's search volume on a national level to find the conditions that were searched most by residents in each state and Washington, DC. We also looked at other data, like STD and obesity rates, to see if we could find any correlations between what people search for and the types of conditions that are common where they live.

Our results may not cure your paranoia, but they should cast some light on what your home state is most concerned about.

The standouts: Diabetes, asthma, and coughing

Now, let’s break the numbers down by state. But be careful—what we found may only add to your anxiety. Look again at the map of each state’s most googled health concerns. Are there some details that stand out to you? These are just a few highlights from our search term research that we found enlightening.

Another common worry of googlers was sexually transmitted diseases (STDs). Here, we did find some interesting correlations between search and health data. Four states searching about STDs—Alaska, Louisiana, North Carolina, and DC—were listed by HighSpeedInternet.com as having the five highest STDs rankings.

We dived into the data even further. We pulled data on the prevalence of one serious STD—syphilis—and then compared them to our list of states that searched for STD-related terms. Sure enough, six states and DC had some type of STD as their top online health search term, and these areas also had some of the highest prevalence of syphilis among their populations.

Perhaps these individuals are more aware of and concerned about serious STDs after being infected or knowing someone who has been diagnosed with an STD.

DC and Louisiana residents’ biggest health concern was HIV, and sadly, the data we found showed that these areas have very high rates of HIV diagnosis.8 In fact, DC had the highest HIV diagnosis rate in the United States in 2015, at 66.1 per 100,000 people.

Eight out of 14 states that searched respiratory-related terms—asthma, bronchitis, coughing, and flu—may be onto something. Besides cancer and heart disease, people in these eight states are most likely to die from respiratory disease.

Could this be one example where people’s Google-based paranoia could lead an individual to get the help they need? Or is all the coughing an omen for things to come?

Drugs and alcohol: Googling under the influence

Maine, Montana, and Alaska seem to be really worried about drugs and alcohol—and they probably have good reason. Here’s what we learned about these states’ concerns:

Obesity and diabetes: A growing concern?

As we said earlier, our research showed that diabetes was the most frequently searched health concern among the states. Because obesity is considered the best predictor of type 2 diabetes,10 we wanted to see if we could find a correlation between the states that were worried about diabetes and rates of obesity.

The state most concerned about obesity over all else was Iowa. What do we think makes Iowans so paranoid about obesity? Well, the state does have a higher-than-average obesity rate,13 though not one of the highest. Perhaps there’s just too much corn in the diet?

From STDs to coughing, each state has its own prime paranoia. If you’ve found yourself worried you have a fatal disease thanks to a quick Google search for “itching,” rest assured you’re not alone.

But maybe we all just need to cool it with the furious internet searches and visit an actual physician instead of consulting Dr. Google every time we feel an itch. Or if you’re in Wyoming, we’ll just recommend some Imodium.

Written by
Eligibility Team
We are a team of experts dedicated to finding the right government programs for you. Our mission is simple: help people quickly and easily understand which programs they might be eligible for—all in one place. Our team is dedicated to researching and providing you with the most relevant information. We compile only the most trusted information from government sources into one place so you can find the facts you need and skip what you don’t.
Read More
Related Articles

Aetna Medicare Advantage Review
As one of the largest healthcare providers in the country, Aetna serves an estimated 37.9...

Amerigroup Medicare Advantage Review
Handfuls of benefits and a variety of SNPs could assist residents of select states. Amerigroup...