Medicare Part D Late Enrollment Penalty (And How to Avoid It)

Of course, the best way to get out of the Part D late enrollment penalty is to avoid paying it in the first place, so we'll cover when to sign up for Part D (or Medicare Advantage with Part D) and when you can delay enrollment without penalty.

But in case you already missed your deadline, we’ll help you calculate your Part D late enrollment penalty. (Grab your calculator!)

Avoid the Part D late enrollment penalty: Sign up at the right time

Usually, the best time to sign up for a Part D plan is during your Initial Enrollment Period (IEP), a few months before and after your 65th birthday.

If you plan on working past 65 and delaying your Medicare enrollment, you can also delay signing up for Part D without penalty. You’ll get a Special Enrollment Period when you retire to sign up for Part A, Part B, and Part D.

If you’re working past 65 and your employer drug coverage is creditable (more on that below), you can sign up for Part A while you’re still working and you’ll avoid the late enrollment penalty for Part D. If your work coverage isn’t creditable, it’s probably best to steer clear of all Medicare’s “Parts” until your coverage ends.

Another way around the Part D penalty: Creditable coverage

If you have a creditable drug plan—that is, if your plan is comparable to a Medicare Part D plan—you don’t need to sign up for a Part D plan until you lose that coverage. Creditable coverage could include prescription drug coverage from a union, an employer (current or former), the Department of Veterans Affairs, etc. 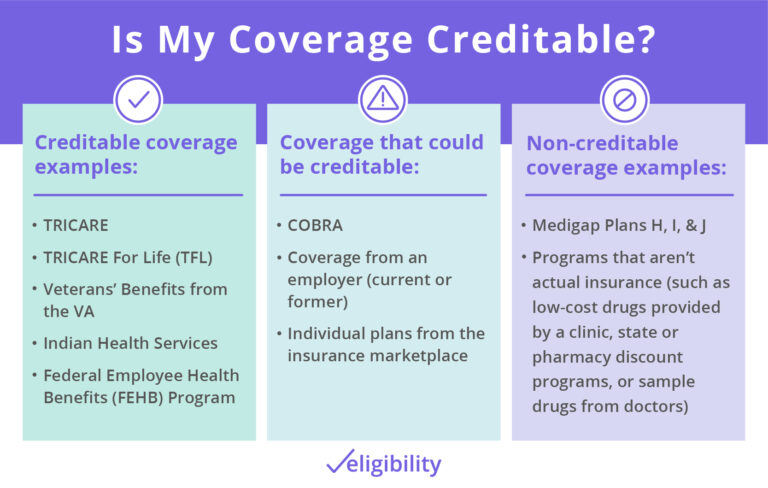 If you lose your creditable coverage, you’ll need to get a Part D plan in place before 63 days have passed to avoid paying late penalties.

Put simply: Medicare doesn't want you to have gaps in your prescription drug coverage.

How do you know if your coverage is creditable?

Your plan will send you a notice every year regarding its creditability. Keep these notices. If Medicare ever makes a mistake with late penalties, you can use them to prove you didn’t have gaps in coverage.

If you don’t sign up for a Part D plan (or a Medicare Advantage plan with Part D prescription drug coverage) during your IEP—and you don't have creditable coverage—you’ll probably face a late enrollment penalty.

How to calculate the Part D late enrollment penalty

Perhaps you missed your initial deadline to sign up, but you need a Part D plan. Or you had a Part D plan, dropped it, and went a while without coverage. Our advice: find a plan soon. Your penalty goes up for every month you lack adequate drug coverage.

You can calculate this penalty yourself, but as you might expect, it’s not very straightforward. We’re going to get into a little bit of math, but it’s not too complicated when you break it into chunks. So grab a piece of paper and something to write with.

There are two variables you need to know before you can find your total.

Variable 1: The National Base Beneficiary Premium

The Part D late enrollment penalty starts with the foundation of something called the National Base Beneficiary Premium (NBBP)—essentially a yearly average of every Part D plan premium in the country. The Centers for Medicare and Medicaid Services (CMS) releases the NBBP annually. And, since the NBBP changes each year, your penalty will change slightly each year.

The next variable is how many full months you’ve gone without drug coverage. When you’re calculating this, keep in mind your gap in drug coverage doesn’t end when you enroll in a Part D plan but rather when your new plan goes into effect. For example, if you enroll during the Annual Enrollment Period in the fall, your coverage won’t go into effect until January 1 of the new year. So your gap in drug coverage would actually extend to January 1, when Medicare recognizes that you’re in a Part D plan.

Now that you know both variables, you can calculate your total late enrollment penalty.

So if you went six months without coverage, your formula would look like this:

The CMS rounds the total to the nearest 10 cents, so your penalty would be $2 per month.

It doesn’t seem like a lot of money—just an extra $24 for a year. But that penalty is just for six months without prescription drug coverage. The longer you go without coverage, the bigger your penalty. It adds up over time.

Here’s an example of the Part D penalty in a real-world scenario:

Susan celebrated her 65th birthday in 2013, and her Initial Enrollment Period ended on June 30, 2013. She enrolled in Medicare Part A and Part B before her deadline but didn’t get a Part D plan since she didn’t take prescription medications. In the summer of 2019, Susan was prescribed medication to treat a recently diagnosed disorder, so she decided to enroll in a Part D plan. She had to wait until the 2019 Annual Enrollment Period to enroll in a Part D plan, and the coverage became effective on January 1, 2020.

How long does the Medicare Part D penalty last?

The penalty lasts as long as you’re enrolled in a Part D plan or a Medicare Advantage plan that includes Part D coverage.

What if my Part D late enrollment penalty is a mistake?

As soon as you enroll in a Part D plan, Medicare audits your insurance history and checks for gaps over 63 days in your prescription drug coverage. If it suspects a gap exists, your drug plan will send you a form and request information. This form is your opportunity to correct your coverage-history mistakes, so don't miss it. If you saved your notices about your drug plans’ creditability, you could send those with the form as well.

There's no doubt that Medicare wants people to enroll in a Part D plan as soon as possible, discouraging lack of coverage with penalties. But what if you don’t take medications? Do you still need a Part D plan?

Like Susan’s example above, it can be costly to postpone Part D until you need it—because someday you might need it more than you realized, only to get hit with a hefty late enrollment penalty.

If you want help getting a Part D plan in place, call a licensed agent.

If you want to find a Part D plan on your own, we have a guide that walks you through how to enroll in Part D. And, if you want some tips for how to find the best plan, check out our guide on how to compare Medicare Part D plans.

Written by
Alex Enabnit
Medicare and geriatric care expert, Alex has one motivation behind every word he writes, and that’s finding you the best medical coverage for your situation. Alex has been featured on Bloomer Boomer, Best Company, HealthPopuli.com, the Daily Ledger on the One America News Network, WBAP News radio, and more. Outside of work, you can find him hiking with his wife and pup or (occasionally) going to the gym.
Read More
Related Articles